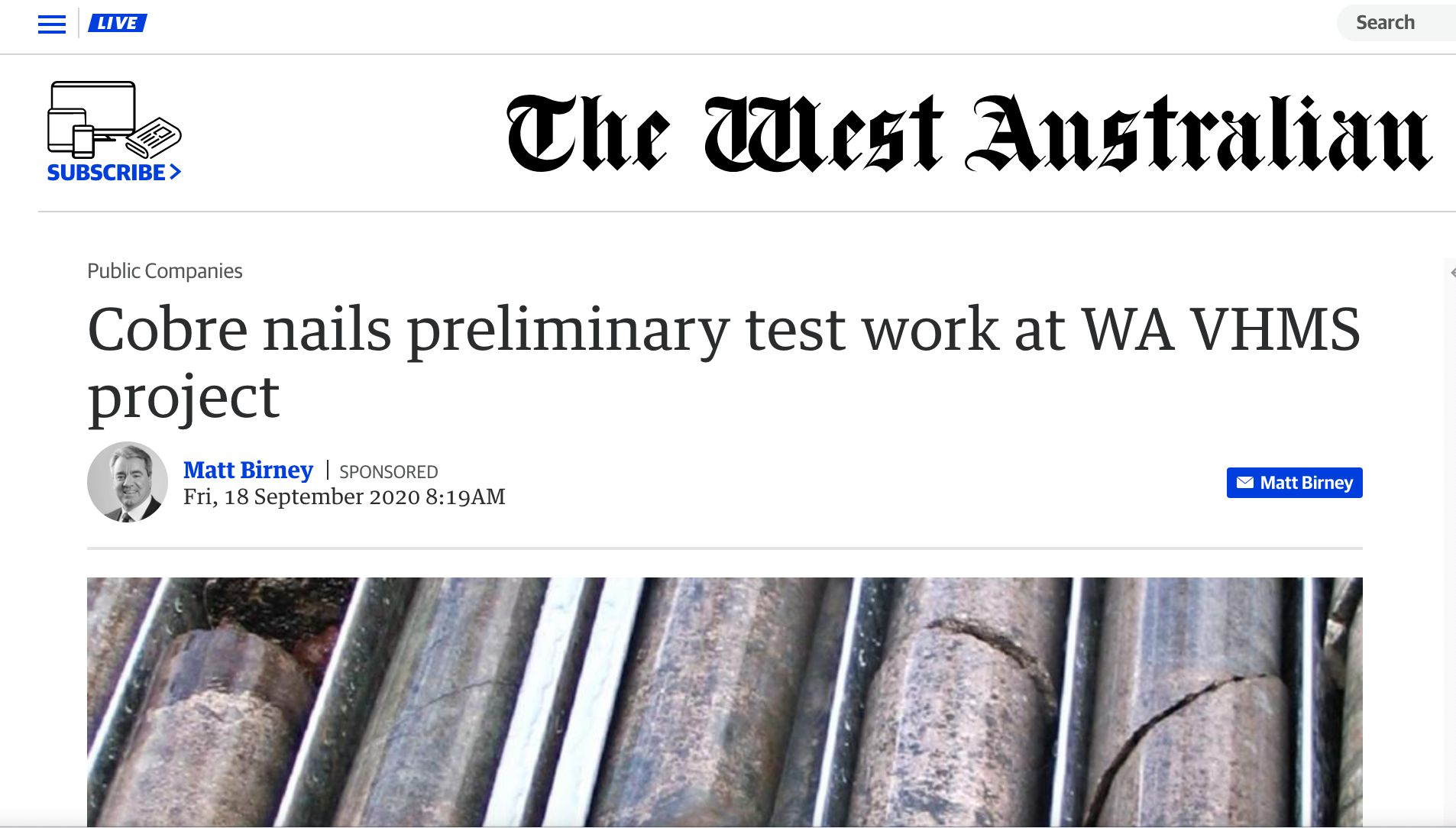 Cobre Ltd has nailed its preliminary metallurgical test work for the Perrinvale VHMS project in Western Australia. One 90kg bulk sample from the Schwabe prospect has undergone initial testing and produced impressive head grades of 3.6 per cent copper, 1.6 per cent zinc, 1.1 g/t gold and 13.1 g/t silver from a standard suite of copper and zinc sulphides. Test work will now proceed to the development of a potential processing route for the project.

Cobre’s sample from Perrinvale will provide a basis for the ongoing metallurgical test work on the volcanic hosted massive sulphide, or ‘VHMS’ mineralisation from the emerging deposit.

Perrinvale is located approximately 260km north west of Kalgoorlie in the Eastern Goldfields of Western Australia. The project comprises of nine exploration licenses, covering over 45km of strike and 381 square kilometres of the prospective Panhandle and Illaara greenstone belts.

The company’s first-pass metallurgical program is utilising a 90kg bulk sample compiled from the drill core from Schwabe with expert consulting group, Independent Metallurgical Operations, having already commenced testing of the sample.

Initial x-ray diffraction and optical mineralogy shows the sulphide mineralisation to consist of copper in chalcopyrite and covellite with zinc in sphalerite – a run of the mill assemblage for processing and the production of a potentially saleable concentrate.

Test work is now proceeding to examine the use of ore sorting, potential grind sizes and floatation testing to begin developing a potential processing circuit for the deposit.

These early results associated with our metallurgical testing are very positive, beginning to lay the foundation to assess the options for Schwabe to deliver economic returns. While we await more detailed results from IMO, expected over the next eight weeks, we will internally assess the resource potential within our existing drilling at Schwabe.

The team on site, while awaiting the arrival of the DHEM crew, are beginning to assess broader areas of the project for VHMS potential. We look forward to applying the knowledge gained across the board by successful drilling of VHMS on the project to date.

Cobre is also undertaking a detailed review of the data at Perrinvale in parallel with an ongoing drilling campaign. The company is following a globally recognised VHMS occurrence model to guide exploration.

Its view is that the VHMS types of deposits occur in clusters, have a discrete footprint and can quickly develop into high-grade, long lived operations once the initial discovery has been made.

The company is currently undertaking a series of deep diamond holes in conjunction with down hole electromagnetics across the project area at Schwabe, Zinco Lago and Piega del West, to assess the lateral continuity and depth potential of the Perrinvale sulphide system.

With early test work boding well for the company at Perrinvale and an ongoing program of drilling and geophysics, Cobre looks well placed to tease out any economic mineralisation that might be lurking below surface at Perrinvale.